We have so many things going on at the farm!  Everything remarkable but not large enough to compose an entire post. Smallishly exceptional. So here we have it~ its and bits.

Maggie presented her head today so I could slip her halter in place without tempting her with a special treat. She just stuck her head into the halter and walked over to her spot in the milking stall waiting for me to tie her in place. No rodeo. No drama. Sweet girl.

It rained a bit yesterday. That misty kind of precipitation that you long for in summer. The grass is squishy with water. We have more on the way. 70% chance for the rest of the day and into the night. Perfect spring weather. You can just hear the grass grow.

One more of the fatties went to his new home. Another will be picked up next Saturday then we will be down to the few we will raise for 4H projects and for a couple of families. Willow’s body is slowly returning to her pre- piglet self, well, almost. As per most mammals, it looks as though her body won’t be completely the same. But she’s an experienced momma now and that doesn’t come without some manner of change.

Muddy little fatties. With more chilly rain in the forecast, this will probably be the cleanest they will be for the next couple of days. They have a nice warm, dry, inside place in which to lounge but they choose to play in the mud instead. Hmmmm~ boys. 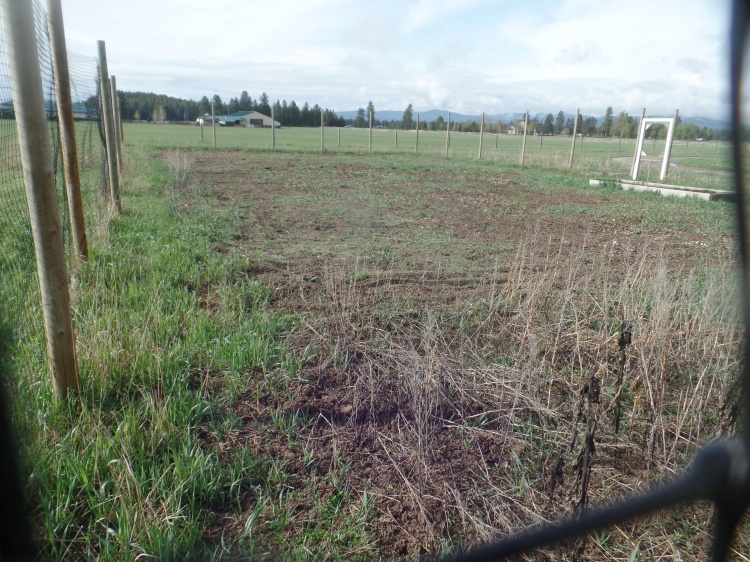 It’s still to early to start the garden. It doesn’t feel like it. But it’s too early. I’ve been fooled many times before. We’ll have warm days and (slightly) warm nights in the first part of May and sometimes, like this year, as early as April. And I’ll till and plant a row of green beans or a row or two of corn. And the seeds never sprout. The soil is too unfriendly and cold. It’s just not prudent to put anything in the ground before Memorial Day. In the meantime, my cover crop of weeds is working well, don’t you think?

The garlic looks wonderful. Just a few stray bit of weeds to pull. Good. I didn’t plant enough last year and I already have to purchase store bought garlic. BLECK.

And more on the gardening front: my lone raspberry bush is starting to leaf out! Yay! I’ve tried with NO success at growing raspberries here in the land-of-raspberries-that-grow-like-weeds.

Everyone, and I mean everyone, I know grows raspberries. Everyone but me. And I’m feeling sorry for myself. I have friends that cry because their freezers are sooooo full of raspberries that they just can’t squeeze another item into them. CRY! I have tried so many years to grow raspberries that it’s becoming a joke to my neighbors. But I have yet to be successful. Here’s the reason. Raspberries, like most fruit bearing plants, take a year or so of growth before they actually produce fruit. So the canes are typically planted in the spring the first year and nothing in the way of fruit is expected. The second year and subsequent years after there should be an ever growing bounty of raspberries. Except if you live in an area that has pocket gofers. So the raspberries work all summer to make roots that will support the plant in the following season. And all winter long the pocket gofers eat out the roots that the plant has so diligently grown. They have a proverbial carnival under the snow and cold, eating the roots and partying all winter long. Therefore, when I come out the following spring to inspect why my raspberry canes have not started leafing out yet, I just find sticks in the ground. With no roots attached. At all.

So right now I have a lone berry bush growing in a large pot. At least I’ll have SOME berries. Maybe my neighbors will stop laughing at me.

On another note. Here’s a pic of the cabbage I planted at the beginning of the month in hopes of propagating cabbage seeds (here it is). It doesn’t look great. But there is a small bit of new growth in the very top. So I’m not giving up yet.

That’s it for tidbits.

Random picture of wild turkeys playing in our fields. The pic is blurry because I’m taking it from about 100000 yards away.  🙂

Today’s count:    58 eggs (I’m not sure how that happened. I only have 55 chickens and 3 of them are roos. Must have missed a couple yesterday :), 2 gallons of milk

Weather: Low around 36. High 60-ish. Rain likely before noon, then showers likely after noon. Cloudy, with a high near 59. South wind around 8 mph becoming west southwest in the afternoon. Chance of precipitation is 70%.

Supper tonight: baked chicken and home made noodles. (I haven’t made these for a long time. We’ll see how they turn out!)