Ken was a beloved part of our family. He came to live with us the same year our youngest was born~ 1999. It was love at first sight. His deep chest. His great capacity. He worked hard for us everyday of his life. And it was this need, this compulsion to constantly run, to work himself to his full function, that proved to be his demise.  Last week, Ken gave out.

Back in 2004, Ken’s guts were damaged by an unexpected flood in the basement of our West Virginia rent home when he was just 5 years old. A wonderful appliance doctor was able to “temporarily” patch him together until we completed our move to Montana. The plan then was to look around for a possible replacement once we were settled. However, after our move, Ken’s “temporary” patch continued to hold. We watched him carefully for any sign of weakness and there was none. We had no reason to look for a replacement.

And so year after year, Ken quietly performed his duties. He never faltered or complained. I had all but forgotten the weakness he had sustained during the flood of ’04.

There was no sound.

Nothing to give away his deteriorating condition.

Yes, our beloved just dropped dead in the middle of the night. And stopped freezing.

He left a huge hole in our lives and the lives of the frozen food we had stored in his great capacity. It was very difficult to find a replacement for Ken. His expanse was too great. We had to scramble. There was even a time when I thought all was lost~ the coveted pounds of bacon, the delectable smoked hams, the tender chicken breasts that Ken was protecting in his great chest. But, to our relief, we happened onto a unit that would take on all his responsibilities. Ken, though not forgotten, never forgotten, would be replaced. The new unit arrives Wednesday.

THANK  GOODNESS!!!! We MUST have bacon! We MUST! 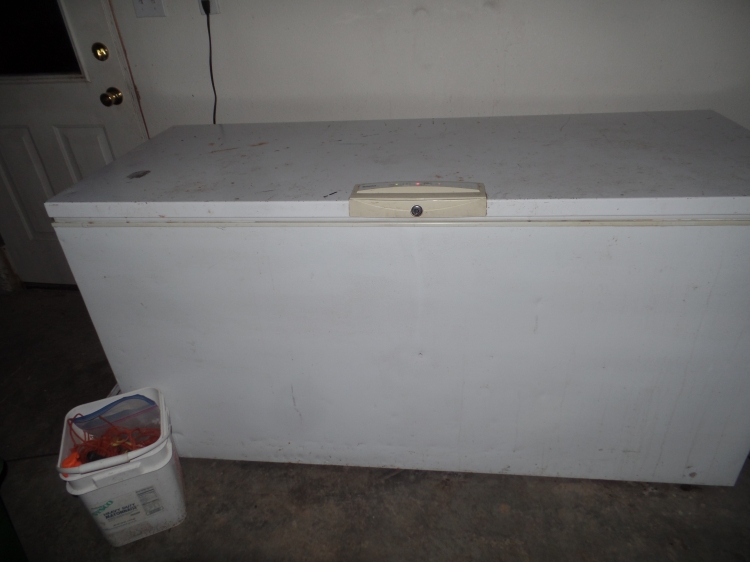 You will always be remembered as our family’s first.