The weather has been almost mild. So we let the teenaged chicks loose with the older hens yesterday. 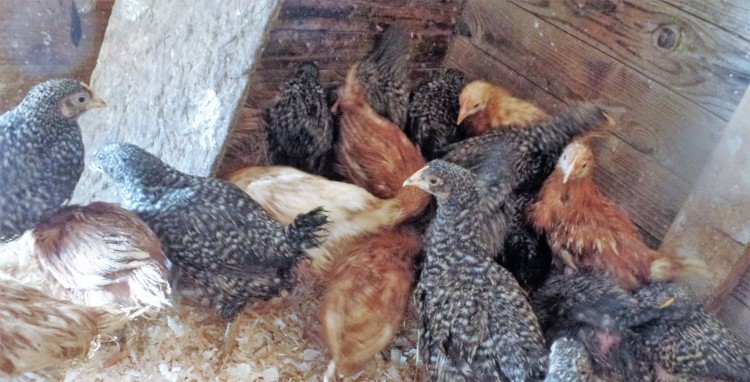 There was a lot of flapping and running about in the coop floor. And a lot of chuckling from the observing humans.

These pictures make the chicks look huge. I guess they are pretty big. They are completely feathered out and actually have been for several weeks. It’s been so cold that I’ve been stalling the big move to the coop. But they’ve outgrown the garage incubator and it’s time they took their place outside.

We (or I should say Rachael, since she is the chick whisperer while I’m healing my broken ankle) transitioned the chicks from non- medicated chick starter to the more protein- filled (is that a word?) layer ration while they were still in the incubator. We, she, started the transition at about 4 weeks old so that by the time the chicks went to the coop they were completely eating only the “big hen” food.

I’m not sure why this little girl looks wet. Our labrador has been known to lick the new chicks until they are sopping wet. Never hurting them. Just giving them an extra good washing. Luckily it’s sunny today. She should dry out before she’s exposed to the cold night air.

Though both of our dogs are bird dogs, neither seem too interested in the chickens. Oh there’s a bit of chasing that goes on sometimes. But nothing too serious. Mickey is the only one we really watch. She is the younger of the two and very earnest in her chase. There have been times she has come away with a mouthful of feathers.

It’s predicted to be a nice day today~ cold but sunny.

Maybe I’ll bundle up and talk the boys into pulling me to the pig palace on the snow sled. I feel like I need to eyeball Willow and her pregnant self.

Weather: Mostly sunny, with a high near 36. Light and variable wind. Tonight mostly clear, with a low around 8. Calm wind.