We all were lulled into thinking we might have an early spring.

The wind is howling out of the north east and there are great drifts forming around the house. We knew it was coming but was hoping this new front might have slipped south and missed us.

The animals are safely tucked in their toasty houses. The chickens have extra food waiting for them in the floor of the coop that I layed out for them last night. They don’t have to wait for me to open the coop door (and blow their feathers all out of whack) to have breakfast. Breakfast in bed!

The cows have a snug barn they can lounge in. Phil is still loving his momma. They are inseparable. 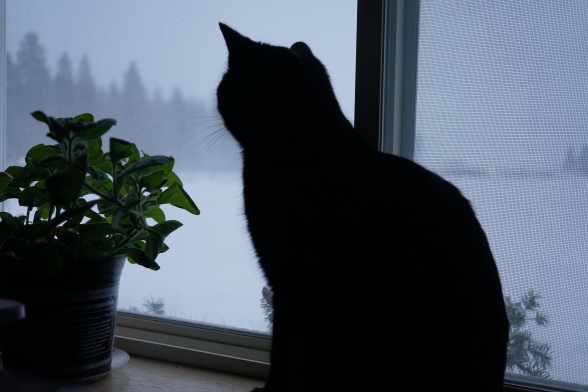 The boys don’t have school until a little later in the day.

I think I’ll enjoy one more cup of coffee before I venture out.

What’s for supper: Ham and cheese sliders and cream of broccoli soup.

Weather: Snow likely, mainly before 11am. Patchy fog before 11am. Otherwise, cloudy, with a high near 31. Northeast wind 5 to 14 mph, with gusts as high as 18 mph. Chance of precipitation is 60%. Total daytime snow accumulation of 1 to 2 inches possible. Tonight a 40 percent chance of snow, mainly before 11pm. Patchy fog after 11pm. Otherwise, mostly cloudy, with a low around 24. Light and variable wind. New snow accumulation of less than a half inch possible.