It’s late (0745) but the sun is just making an appearance. The light really messes me up this time of year. It seems like it’s way into October before I move with the flow of fall instead of fight against the change. Don’t get me wrong~ I LOVE fall but weather changes gives me “itchy feet syndrome” (no~ not the kind of itch that needs a powder 🙂 ). I think it’s that last “I-need-to-get-out-into-the-woods-before-the-snow-comes-and-makes-us-housebound”. Except I used to feel this way in Texas too. Hmmmm. Weird.

The garden is almost completely cleaned out. The sunflower stalks, leftover squash vines, old spent bean plants~ all are slowly being harvested and given to the cow.

All that’s left growing is this very lovely chamomile. This stuff is so hardy.  And it smells really nice too. I have bouquets of it all around the house. It won’t be much longer til we have no fresh green available to us.

Maisey is in heat. You can hear her singing all over the valley.  We are really fortunate that our neighbors don’t mind the noise.  One of my friends even mentioned that she likes the sound of Maisey’s bellowing. She explained that she grew up on a dairy farm in Wisconsin and the “singing” reminds her of home. That’s a good thing! Maisey can really belt it out! Maybe I should have named her “Bette”. 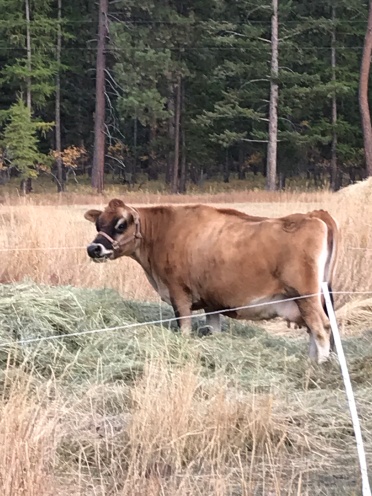 Poor thing. She just knocks the little bit of grain from her bowl onto the ground and it becomes fair play. A little treat for her becomes a treat for all. 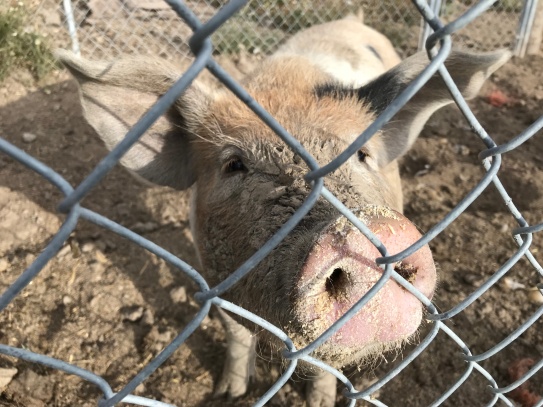 And look! The piggies have finally figured out that I am the candyman~ er~ girl~ um~ woman. These little fatties now come running too me when I come out with the white bucket instead of running away. Look at that sweet pig nose! (This picture is a little deceiving. The pigs are over 100 lbs but this snap makes them look smallish. I can’t give them ear rubs yet. But I don’t think it will be long before they let me scratch them. They don’t know what they are missing!)

Of course we can’t have a post without a little bit of farmer geekness:

Did you know that strawflowers close up their buds at night or on a cloudy day? I didn’t. I’m not sure how many evenings I ventured out the the garden to harvest the strawflowers only to find them tucked up for the night. This is how I want them to be when harvesting~ open and showy and all lovely and such. 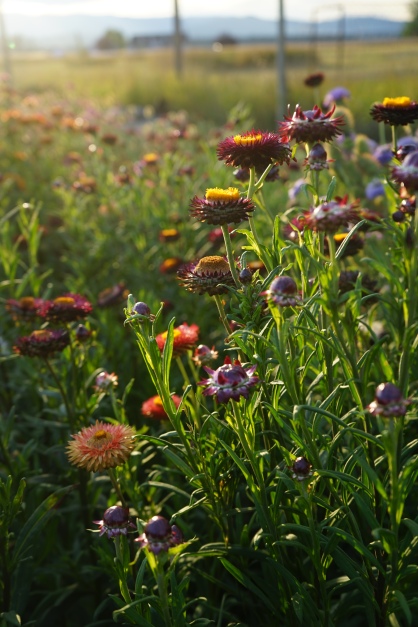 Instead I find this: 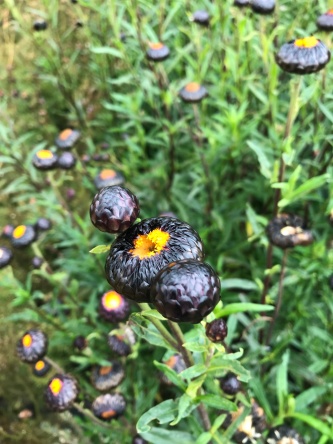 Hmmm. Who knew? I sure didn’t! So now I need to sneak out later in the day when the sun is high and the bugs (IE: bees) are all active, so I can snip me some open strawflower blooms.

What’s for supper: Pork roast with mashed potatoes and salad.