….morphing into lovely fall days. The temps have been swinging from the low 20’s (17 one night last week!) into the 60’s during the day.

The garden clean up iiiiissssss. Sssssooooo. Ssssssllllloooooowwww. But I am on both feet solidly instead of 4 wobbly feet (crutches) like this time last year.

And I am thankful.

Most of the dead has been removed to the back of the truck where it will be moved to the compost heap. We have so much to compost this year!

Garden buddies in front of the pretty big pile of sweet pea vines.

Usually I worry about composting because any little bit of missed food out in the open can attract bears. I’m not so worried this year because we grew more flowers than food.

Lots of Dusty Miller this year. I love this stuff! We’ve had several nights (as in~ almost-every-night-this-week) down way below freezing. But this great stuff persists.

This year I decided to actually pull it a little early and dry it for later use. 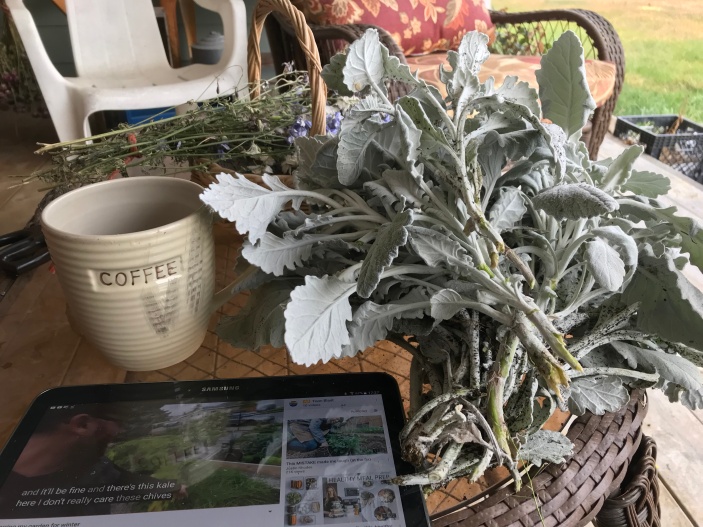 Bundled and drying on our north porch.

So I have yet another geeky flower farm experiment going that I’m just sure y’all are just chomping at the bit to hear about!? It’s a small one (not like the one I’m going to show in the next post 🙂 )

Last year the area where I was going to grow ranunculus was still covered in snow when it was time to plant. So I planted the corms in crates. And placed them on the north facing patio. (The fact that they were facing north isn’t really important~ more like they were easy for me to get to on the north porch.) They did only alright. The plants bloomed but I wasn’t that impressed. It was my first year to grow them and I have a lot to learn about growing nice ranunculus. (I have another idea for runcs this year. I’ll bet you can’t wait to hear! Later~ I promise…..) 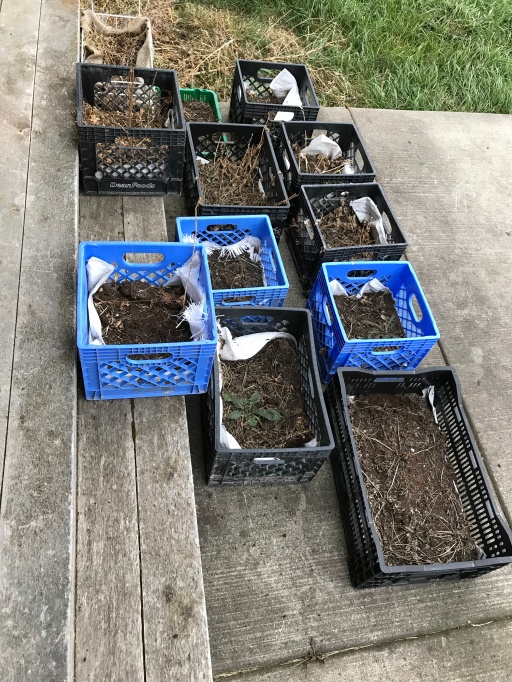 So anyway these crates have been sitting on the patio waiting for me to get back to them.

Initially I was just going to dump the used soil into a flower bed, old corms (which I thought must be dead by now) and all. However, I was just reading on another flower farmer website that she re-uses her corms from year to year.

I’m sure she probably takes better care of her little runc corms better than just leaving them off the back of the north porch to fend for themselves all summer. So I checked the soil as I was dumping it and LOOK WHAT I FOUND!!! CORMS! AND SOME OF THEM LOOK VIABLE!!!

Look at this fat little baby!

Squishy all washed up. 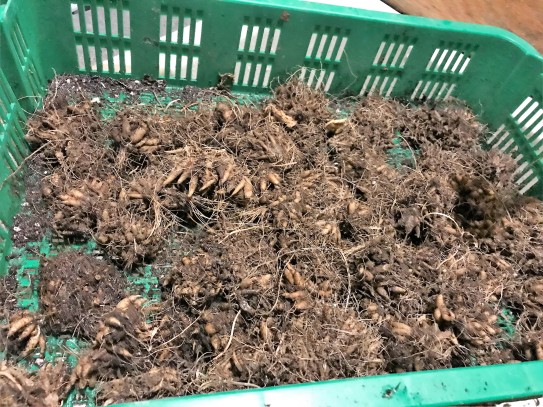 I have a nice little stash of older corms to grow alongside the newly purchased corms. (Ooooo! I feel another “experiment” coming on!) It took a while to go through all those crates and pick out the corms that might be viable. Hopefully it will be worth it.

Besides, what else do I have to do?

Weather: Sunny, with a high near 64. Light and variable wind. Tonight clear, with a low around 26. Calm wind becoming northwest around 5 mph after midnight.